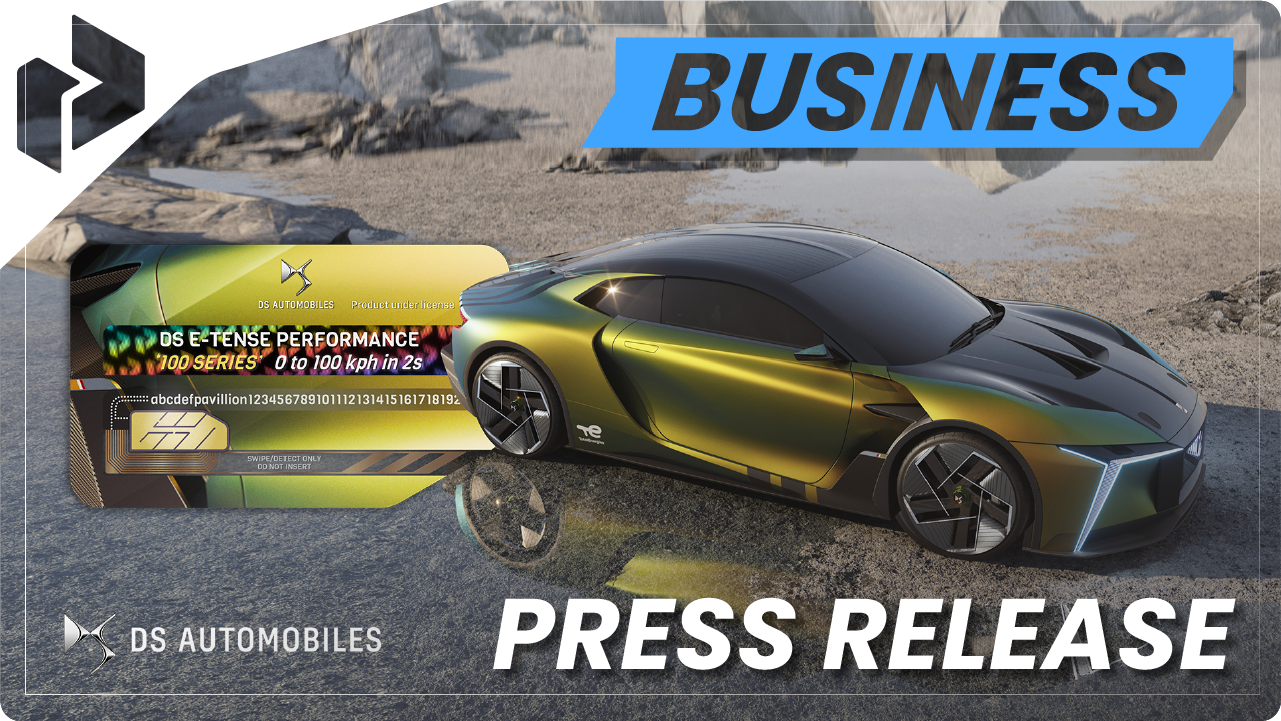 MELBOURNE, Australia, February 9, 2022 – AAA game development studio GOATi Entertainment is giving car manufacturers an enticing reason to step into the Metaverse by bringing their concept vehicles to life as NFTs. Limited edition vehicle NFTs developed by GOATi Entertainment will be auctioned off to the public on their proprietary built blockchain gaming platform, Pavillion Hub, unlocking a new stream of revenue for car manufacturers and enabling the first true cross-game racing multiverse experience in gaming history.

Leading the line-up is DS Automobiles who has partnered with GOATi Entertainment for the reveal of their DS E-TENSE PERFORMANCE, a unique high-performance prototype, totally unacquirable – until now. Running over 258 days as part of its official brand activation commencing on 7 February and ending with the final showcase at the end of October, DS Automobiles is releasing a run of limited edition DS E-TENSE PERFORMANCE NFTs. The Formula E inspired high performance laboratory, integrating Formula E technologies, will be accessible in-game in the real time physics simulated racing environment of Pavillion’s ‘Race Hub’ with its decentralised vehicle, track and event design.

Launching with the ‘100 Series’ vehicle auctions in tribute to the DS E-TENSE PERFORMANCE’S ‘100% Electric’ and ‘0-100km/h in 2 seconds’ achievements, the public will have 24 hours over 100 consecutive days to purchase 100 special edition ‘100% Electric’ DS E-TENSE PERFORMANCE NFTs until 18 May @2pm CET when the first in-game access of the vehicles will take place on Pavillion’s dedicated racing central ‘Race Hub’. Two additional ‘0-100km/h in 2 seconds’ edition vehicles will be auctioned off over the same period, running for 50 days each.

“As the first company ever to deliver racing utility for NFT vehicles, all auctioned vehicles will offer utility (as well as collectability) and will be accessible in-game in a real time physics simulated racing environment,” comments Garth Midgley, Managing Director or GOATi Entertainment. “Vehicles will be able to be used in a decentralised way in more than one game on Pavillion, on a number of different tracks and in different events, including prized tournaments. With game-play elements such as track design, race modes and event rules open to community modders, brands like DS Automobiles can achieve maximum engagement with their audience.”

The ‘100 Series’ auctions will be immediately followed by a 3-part themed series of special edition NFTs celebrating the outstanding performance of DS Techeetah and its drivers in Formula E running from the 18 of May until the end of October.

Get ready to race in the Metaverse

To be one of the first in the world to own a limited edition DS E-TENSE PERFORMANCE prototype NFT, head over to the DS Automobiles games page at Pavillion Hub to set up your account and start bidding.

Everyone that picks up a DS E-TENSE PERFORMANCE vehicle will have first-in, free access to both Race
Hub and ‘22 Racing Series‘, GOATi’s physics-based futuristic racing game, including prized events
following the Race Hub launch and throughout the campaign.

GOATi Entertainment is a AAA game development company specializing in engine technology, physics
simulation, blockchain integration and global microtransaction business models for games and
esports. Built upon their proprietary engine ‘RevGen’, they have developed globally recognized and
award-winning emergent AI simulation programs and the world’s first RTS-Racing game ’22 Racing
Series’. They have pioneered the development of Smart NFT blockchain technology using Phantasma
Chain, the world’s only carbon-negative blockchain, and in April 2020, they released ‘Pavillion Hub’,
the world’s most advanced blockchain gaming platform, which was purpose-built with ease of use
sign-on, transact, play and cross-platform connected features that make mass adoption of blockchain
technology in games a near reality.

Designed for a customer base looking for personal expression and eager for new technologies, DS models combine refinement and technology. With DS 3 CROSSBACK, DS 4, DS 7 CROSSBACK and DS 9, DS brand is launching a global range. The only brand able to claim a double Formula E championship (Teams and Drivers) in 2019 and 2020, DS Automobiles is at the cutting edge of electrification by offering all its models in an electrified version. Under the E-TENSE label, DS Automobiles offers both an 100% electric and plug-in hybrid of up to 360 horsepower with 4-wheel drive. From 2024, every new model launched by DS Automobiles will be only 100% electric. For its discerning customers, DS Automobiles has created “ONLY YOU, a wealth of attentions”, its exclusive service programme for a unique brand experience.
With a presence in 41 countries, the DS brand has created and is developing an exclusive distribution network that includes 400 DS STORES throughout the world.